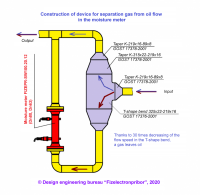 This solution has become possible due to a large volume measured in the FIZEPR-SW100 sensors at a time. For example, the material volume controlled in FIZEPR-SW100.20.12 (DN80, PN63) sensors at once is more than 2 liters. Crude oil consisting of poorly mixed water and hydrocarbons is measured as a homogeneous mixture when such a large volume is analyzed.

This feature of moisture meters ensures a solution based on a sharp drop of the flow speed when the pipeline section is expanded. When the flow speed drops abruptly (the figure shows a version with a 30 times speed drop), the gas is separated: it is separated from the liquid and passes through a separate channel outside the moisture meter. It means that the crude oil flowing through the moisture meter is also stratified, but as shown above, this stratification has little effect on measurement results.